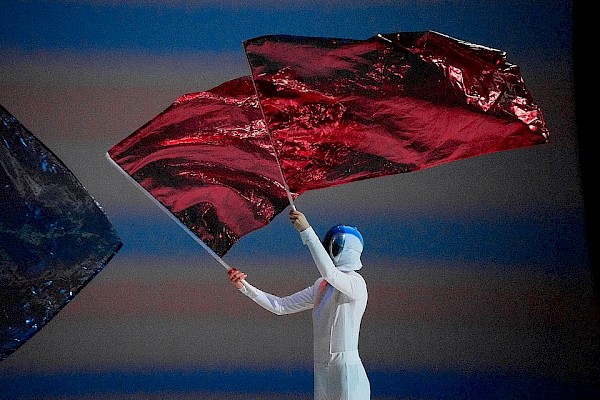 Flags are an integral part of our lives. They indicate affiliation, from a football club to a nation, from a religion to a party during a political event. Sometimes they just mark things or objects that require attention, other times state deterrence or allowance. Flags are twirled through the air and used at sea to communicate when nothing else works. Though people can now communicate across distances in real time thanks to satellites and broadband networks, flags still retain their importance for transporting concise messages.
In her new piece, Frankfurt choreographer Paula Rosolen therefore focuses on this usually ignored means of communication. She superimposes several semiotic systems to create a visual language of her own, which is meant to transmit messages within her ensemble of dancers and between them and the audience. The theatre becomes then an experimental ground on which fundamental principles of communication – including misunderstandings and misdirected information – can be playfully experienced with validity even in the age of binary code.

Paula Rosolen studied dance at Frankfurt University of Music and Performing Arts and completed a master's degree in choreography at Justus Liebig University in Giessen. In her choreographic pieces, she works along the boundaries between dance, performance, music and theater. P. Rosolen aims to make visible the dance that is inherent to popular culture and mundane activities. These subjects are always studied from a distinct point of view and are usually set in a foreign context. In Aerobics! – A Ballet in 3 Acts (2015), for example, she dealt with this form of fitness training, which was developed for the U. S. Air Force. She was awarded 1st prize at international competition Danse Élargie, organized by the Théâtre de la Ville in Paris and the Musée de la danse in Rennes and was invited to show this piece at the 2016 German Dance Platform. In Puppets (2016) and PUNK‽ (2018) she continues to set her focus on researching movements of puppeteers or setting out in search of the traces of Punk Rock. For FLAGS, a co-production with HELLERAU – European Centre for the Arts and Künstlerhaus Mousonturm, another layer of complexity is added. This time it is not only the movement material but also the communication systems of flags and signs around us in normal life.
Her work has been shown at deSingel Arts Campus in Antwerp, Theaterfestival Basel, the Théâtre de la Ville Paris, the Musée de la danse in Rennes, the European Festival for Contemporary Dance in Poland, the Centro Cultural de la Cooperación in Buenos Aires, Künstlerhaus Mousonturm in Frankfurt, the Sophiensæle in Berlin, the Akademie der Künste in Berlin, ZKM Karlsruhe, the Museum Wiesbaden, Kampnagel in Hamburg, Dance New Air Festival in Tokyo.
Paula Rosolen has had residencies at Goethe-Institute’s Villa Kamogava in Kyoto, K3 Center for Choreography in Hamburg, Workspace Brussels, Hessian State Ballet and at Saison Foundation in Tokyo.
https://haptic-hide.com/en/about-Paula-Rosolen.html